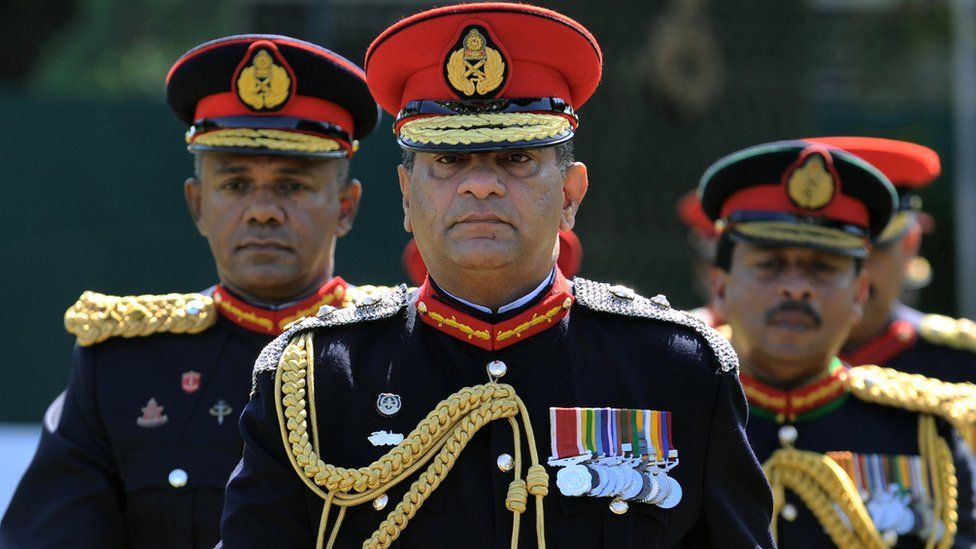 Australian Tamils and human rights groups have called on the Australian Government to impose sanctions against Sri Lankan General (retired) Jagath Jayasuriya for his command role in atrocities in Sri Lanka and following failure by the Australian Federal Police (AFP) to investigate the former Army Commander after he was allowed to enter Australia.

The request to sanction Jayasuriya follows similar requests to the UK and other governments. Filed on 4 March 2022, the 100-page submission is the first public substantive request by human rights groups urging the Australian Government to make use of its new targeted human rights sanctions laws, also known as Magnitsky sanctions.

In May 2019, the accused war criminal entered Australia to visit family members and made appearances at public events in Melbourne. The International Truth & Justice Project (ITJP), the Australian Centre for International Justice (ACIJ) and the Human Rights Law Centre (HRLC) wrote to the AFP and referred Jayasuriya to the authorities for urgent criminal investigation under the principle of universal jurisdiction which is available in Australian law. The groups subsequently filed a draft indictment that contained excerpt testimony from 40 witnesses and survivors of atrocities and torture.

The groups accuse the AFP of undermining accountability through its failure to investigate and take seriously reports of grave international crimes where an accused was present in the jurisdiction and was likely to return. It has recently come to light that Jayasuriya was again present in Australia in late October and November 2019 and attended public events. The groups are calling for an inquiry into the missteps by the AFP and the Department of Home Affairs and the Australian High Commission in Colombo. These serious failures demonstrate that a specialist investigations unit is urgently needed in Australia so that investigators with expertise in international crimes can respond swiftly and act promptly in such circumstances.

Jayasuriya is responsible for a wide range of acts or omissions that amount to serious violations of international human rights law, international humanitarian law and amount to war crimes and crimes against humanity in the final phase of the civil war in Sri Lanka which ended in May 2009. Jayasuriya authorised and oversaw:

In August 2017, Jayasuriya fled Brazil to Sri Lanka after ITJP filed criminal cases with prosecutors in Brazil, Chile and Colombia whilst he was Ambassador to several Latin American countries.

More than a decade after the end of the civil war in Sri Lanka, no perpetrator has been held accountable for the atrocities committed in the war. No accountability mechanism other than under the principle of universal jurisdiction, is available to the survivors and victims. Targeted sanctions can therefore help fill the accountability gap and undermine the impunity enjoyed by the Generals. It’s #TimeToSanction the Sri Lankan Generals.

Selvi* survivor of the Vanni ‘No Fire Zone’ said:

“I was in the ‘No Fire Zone’ at the end of the war. I witnessed so much horror. Despite the war having ended over a decade ago, the wounds and unresolved trauma keeps intruding in my life. The idea that perpetrators can roam free, without feeling the remorse or seeking redemption pains me. We need to deny privileges to those who do wrong in the quest for justice.”

“There are hundreds of war and torture survivors from Sri Lanka in our community, some of them Australian citizens, many of them sought refuge here after the crimes perpetrated by the Sri Lankan army under the command of Jagath Jayasuriya. It’s outrageous he was allowed into Australia as a free man without any scrutiny for his crimes. Australia must listen to the survivors and either prosecute him or sanction him now.”

“Australia should not become a haven for alleged war criminals from Sri Lanka – especially as the large Tamil community flourishing there, expects their government to honour their human rights obligations to victims. Magnitsky sanctions are an important tool for the international community to assert the truth for victims in situations when the country itself is unwilling to act.”

“Whilst we remain hopeful that Jagath Jayasuriya will one day face a court to answer to the crimes he committed, we now request the Australian Government to impose sanctions against him for his role in the atrocities in Sri Lanka. There are many victims and survivors of his crimes that call Australia home. The Government has an obligation to victims and should work in concert with the UK and others to impose sanctions on Jayasuriya and other Sri Lankan Generals responsible for international crimes.”

“The AFP must answer for their abject failure in the handling of a serious criminal referral and our warning that an accused war criminal was roaming freely in Australia. There must be an inquiry into its mess. Home Affairs needs to answer for how Jayasuriya was able to pass the character test to enter Australia on multiple occasions.

“To think that he was present again, five months after we alerted the AFP, and at least one month after referring him for criminal investigations, is a blight on Australia’s responsibility to investigate and prosecute those accused of the most serious crimes against humanity.”

“Many Tamil victims and survivors of Sri Lanka’s atrocities call Australia home, and the Australian Tamil community has been campaigning for years to bring perpetrators of these crimes to justice. In failing to investigate Jayasuriya for his role in such crimes, Australia sends a message that alleged perpetrators can enjoy impunity just as they do in Sri Lanka which has never enabled a genuine mechanism for accountability.

“Australia must establish a genuine and effective mechanism to comply with its international obligations. In failing its obligation to investigate, the Australian Government must impose sanctions on individuals such as Jayasuriya who have credible evidence implicating them in the atrocities committed in Sri Lanka.”

*Name has been changed to protect the identity of the survivor.

Selected Footage of Jayasuriya in Australia