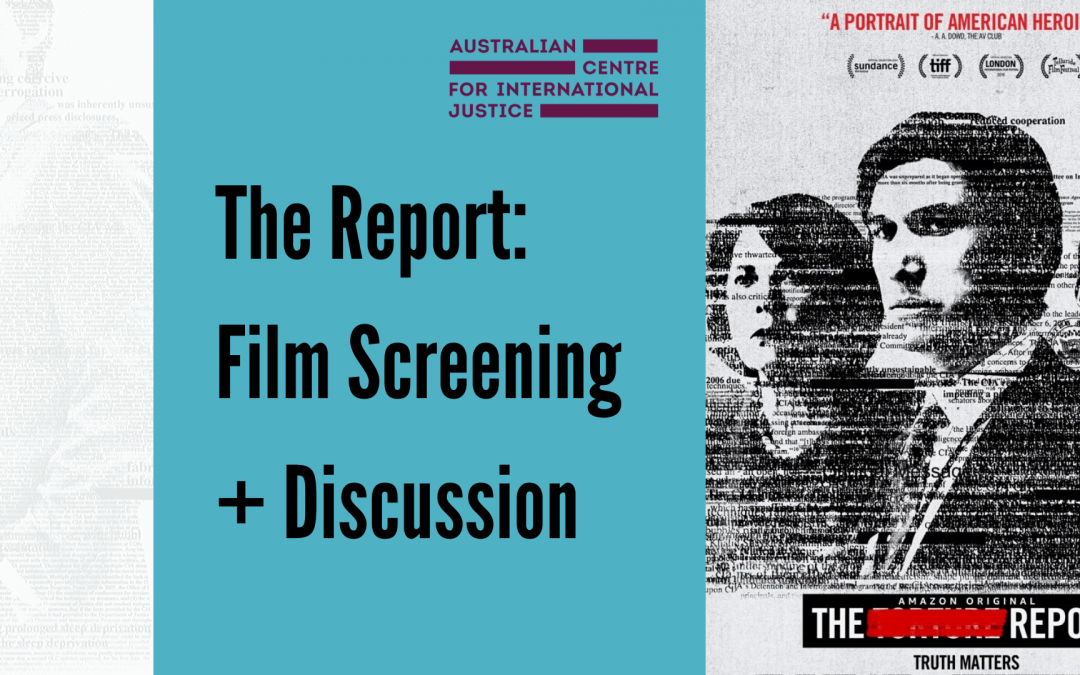 The ACIJ is excited to screen, The Report, and host a short discussion with journalist Raymond Bonner & lawyer Fiona Nelson.

The Report is a riveting thriller based on actual events. Idealistic staffer Daniel J. Jones (Adam Driver) is tasked by his boss, Senator Dianne Feinstein (Annette Bening), to lead an investigation of the CIA’s detention and interrogation program, which was created in the aftermath of 9/11. Jones’s relentless pursuit of the truth leads to explosive findings that uncover the lengths to which the nation’s top intelligence agency went to destroy evidence, subvert the law, and hide a brutal secret from the public.

Please arrive at 6.15pm, the screening will begin at 6:30pm, and will be followed by a discussion with lawyer Fiona Nelson and journalist Raymond Bonner.

Raymond Bonner practiced law for a decade and taught at the University of California, Davis, School of Law. He later became an investigative reporter and foreign correspondent for the New York Times, where he was a member of a Pulitzer Prize–winning team in 1999, and a staff writer at The New Yorker. He is the author of Weakness and Deceit: America and El Salvador’s Dirty War, Waltzing with a Dictator: The Marcoses and the Making of American Policy, and Anatomy of Injustice. He is involved in Freedom of Information litigation to access documents related to the detention, torture and interrogation of Guantanamo detainee Abu Zubaydah. He also is the owner of Bookoccino, the iconic Northern Beaches bookstore.

Fiona Nelson worked for the last four years at the European Center for Constitutional and Human Rights (ECCHR), a Berlin-based NGO that uses strategic litigation to challenge human rights abuses. Her focus was on accountability for torture and war crimes committed in the context of post-9/11 counterterrorism operations and the wars in Iraq and Afghanistan. She worked on legal actions concerning states’ complicity in unlawful drone strikes in Yemen as well as criminal complaints on behalf of individuals subjected to torture at Guantanamo and CIA blacksites.

About the Australian Centre for International Justice:

The Australian Centre for International Justice (ACIJ) is an independent and not-for-profit legal centre and non-government organisation that fights for justice and accountability for grave crimes and is working to develop Australia’s investigations and prosecutions of war crimes, crimes against humanity, genocide and torture.

We would love your support, please consider making a tax-deductible donation to our launch fund here.