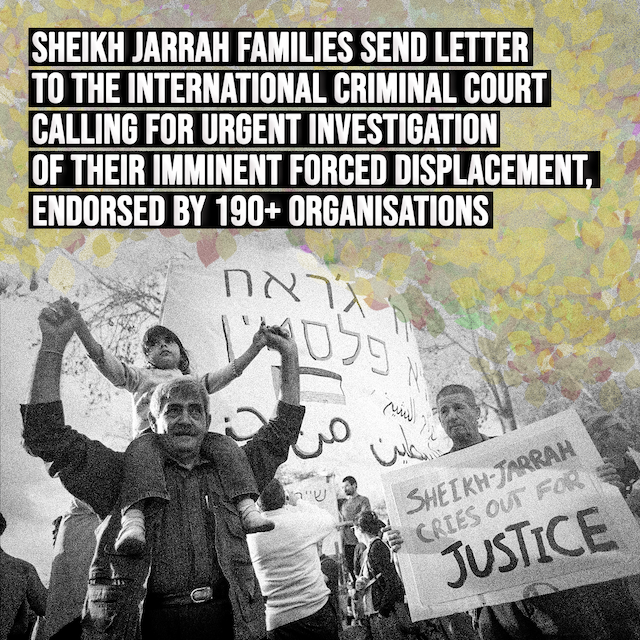 The Australian Centre for International Justice, joined 191 other human rights organisations to support Palestinian families in Sheikh Jarrah, occupied East Jerusalem, in their request to the International Criminal Court Prosecutor to investigate forced evictions as part of the Prosecutor’s open investigation into war crimes and crimes against humanity in Palestine. Specifically, the families called on the Office of the Prosecutor to include as part of its investigation the related war crimes and crimes against humanity, including forcible transfer, appropriation of property, persecution, apartheid, and other inhumane acts causing great suffering or serious injury arising from their forced evictions

The letter represents 28 Palestinian families constituting approximately 500 Palestinians from the Sheikh Jarrah neighbourhood in occupied East Jerusalem, who are facing imminent forced displacement. For many of the families, these evictions would constitute their second or third forced displacement since the 1948 Nakba. The letter outlines that following the ruling of Israeli courts in favour of eviction lawsuits undertaken by a settler organisation, 87 Palestinians in the neighbourhood are at imminent risk of forced eviction including four families by 2 May 2021 and three other families by 1 August 2021.

The Sheikh Jarrah families continue to endure a lengthy, exhausting, and unaffordable legal battle since 1972 in order to confront the eviction lawsuits brought against them by a settler organisation before Israeli courts, which unlawfully apply Israeli discriminatory domestic law to the occupied territory. The families are now pursuing accountability before the ICC.

The Sheikh Jarrah families called on the Office of the Prosecutor to publicly condemn the imminent forced evictions of Palestinians in the Sheikh Jarrah neighbourhood and urgently investigate this case within the Situation of Palestine and intervene to forestall the displacement of these Palestinian families from their homes.

Read the letter to the ICC Prosecutor here.

The Hague, The Netherlands

We, the undersigned, are representatives of 500 Palestinian refugees residing in the Karm Al-Ja’ouni area of the Sheikh Jarrah neighbourhood in occupied East Jerusalem, Palestine, at risk of forced eviction by Israel, the Occupying Power. Amidst this global pandemic, eight families totalling 87 Palestinians, are at imminent risk of forced eviction. Unlawfully applying Israeli domestic law to an occupied territory, Israeli courts have ruled in favour of lawsuits undertaken by settler organisations to evict the eight Palestinian families. Israel’s Jerusalem District Court has ordered four families to leave their homes by 2 May 2021 and three other families by 1 August 2021.1 For this reason, immediate action by your Office is necessary to forestall the displacement of these Palestinian families from their homes in East Jerusalem.

We, and the endorsing organizations, call on your Office to include the imminent forced displacement of Palestinians from Sheikh Jarrah as part of the open investigation, and the related war crimes and crimes against humanity on the territory of Palestine of which this action is but the latest example. Specifically, we ask that you include as part of the investigation the war crimes of forcible transfer of parts of the population of the occupied territory (art. 8(2)(b)(viii) and 8(2)(a)(vii)), transfer by the Occupying Power of parts of its civilian population into the territory it occupies (art. 8(2)(b)(viii)), destruction and appropriation of property not justified by military necessity and carried out unlawfully (art. 8(2)(a)(iv))  and, as these forced evictions are part of an ongoing, widespread and systematic attack against Palestinian civilians, the crimes against humanity of deportation or forcible transfer (art. 7.1(d)), persecution (art. 7.1(h)), apartheid (art. 7.1(j)) and other inhumane acts causing great suffering or serious injury to inter alia mental health (art. 7.1(k)).

In 2018, the Office of the Prosecutor issued a statement expressing concern regarding the planned eviction of the Bedouin community of Khan al-Ahmar “and with it the prospects for further escalation and violence,” and put Israel on notice “that extensive destruction of property without military necessity and population transfers in an occupied territory constitute war crimes under the Rome Statute.”2 With the Court’s jurisdiction over the territory of the State of Palestine – Gaza and the West Bank, including East Jerusalem – confirmed,3 and an investigation underway,4 we call upon your Office to urgently focus on this component of the investigation before the Palestinian residents of Sheikh Jarrah suffer imminent and irreparable harm due to Israel’s settlement-related criminal activities.

During the 1948 War, we were forcibly displaced from our homes in Palestinian towns, cities, and villages that are today inside the Green Line, and following the establishment of the State of Israel, have been denied our inalienable right to return to our homes and properties. In 1956, 28 Palestinian refugee families moved to the Karm Al-Ja’ouni area of Sheikh Jarrah in East Jerusalem as part of an agreement between the government of Jordan and the United Nations Relief and Works Agency (UNRWA). The agreement stipulated that the Jordanian government would provide land, that UNRWA would sponsor the construction of housing units for us on this land, and that we would receive legal title to the properties after three years. The legal title of the property was never transferred to us. Rather, since Israel occupied and illegally annexed East Jerusalem in 1967, all Palestinian Jerusalemites have been subjected to a coercive environment designed to transform Jerusalem’s demographic composition to secure Israeli-Jewish control over Jerusalem and drive out Palestinians. Today, the Karm Al-Ja’ouni area is home to at least 72 Palestinian households of approximately 500 people, and we all face the threat of a second forced displacement.

The eviction orders by Israeli courts in favour of the settler organisation Nahalat Shimon International in our neighbourhood have been facilitated by the 1970 Legal and Administrative Matters Law, which exclusively allows Jewish Israelis to pursue claims to land and property allegedly owned by the Jewish population in East Jerusalem before the establishment of the State of Israel in 1948.5 Utilising this law, the Israeli Custodian General in 1972 transferred the ownership of the Karm Al-Ja’ouni land we have been residing on since 1956 to two Jewish Committees. In the 1990s, the two Jewish Committees sold their ownership rights to Nahalat Shimon International, a private settler organisation, which does not have ties to the original alleged Jewish owners. The settler organisation has vigorously worked to bring eviction lawsuits against us.

Three families totalling 67 people were already forcibly evicted from our neighbourhood in 2009, with the support of the Israeli police. Following these evictions, the settler organisation, Nahalat Shimon International, submitted a Town Plan Scheme to the Jerusalem Local Planning Commission of the Jerusalem Municipality for the establishment of a new settlement in our neighbourhood. The Plan proposed to evict the Palestinian residents, demolish their houses, and later construct 200 settlement units for Jewish Israeli settlers.6

In addition to the threat of losing our homes, we have been enduring a lengthy, exhausting, and unaffordable legal struggle to challenge the eviction lawsuits filed against us by settler organisations in Israeli courts since 1972. Given the discriminatory and untransparent nature of the Israeli legal system as applied in the occupied territory, we are systematically denied access to justice or any effective remedy.

If the forced evictions move forward, we will be subjected to other Israeli policies that together make-up Israeli practices that result in the widespread and systematic transfer of the Palestinian Jerusalemite population. If we set up a tent outside our houses, the Israeli occupying forces will demolish it, as part of its widespread and systematic policy of demolition of Palestinian property. If we rent a home outside Jerusalem because we cannot afford to rent in Jerusalem, we will be at risk of having our residency status revoked and not be allowed to enter Jerusalem, pursuant to Israel’s residency revocation policy, which requires Palestinian Jerusalemites to constantly prove their “center of life” is in the city.

We welcome the 3 March 2021 announcement by your Office on the opening of a full criminal investigation into the Situation in Palestine. This is a long-awaited and a critically important step towards ensuring the rule of law and ending impunity, while ensuring accountability for Israel’s crimes within the jurisdiction of the Court.

As part of that investigation, we call on your Office to:

We remain at your disposal and stand ready to provide further information to assist the investigation.

Read the letter to the ICC Prosecutor here.