For the first time, the Australian Centre for International Justice was represented at the Assembly of States Parties (ASP) to the Rome Statute of the International Criminal Court (ICC) meeting in its 18th session in The Hague, Netherlands at the World Forum Convention Centre from 2 – 6 December 2019.

What is the ASP?

The ASP brings together States Parties, observer States, invited States, international and regional organisations and representatives from civil society to discuss the key challenges facing the International Criminal Court and the Rome Statute system of international justice, and to make important decisions and adopt resolutions relating to the functioning of the Court. 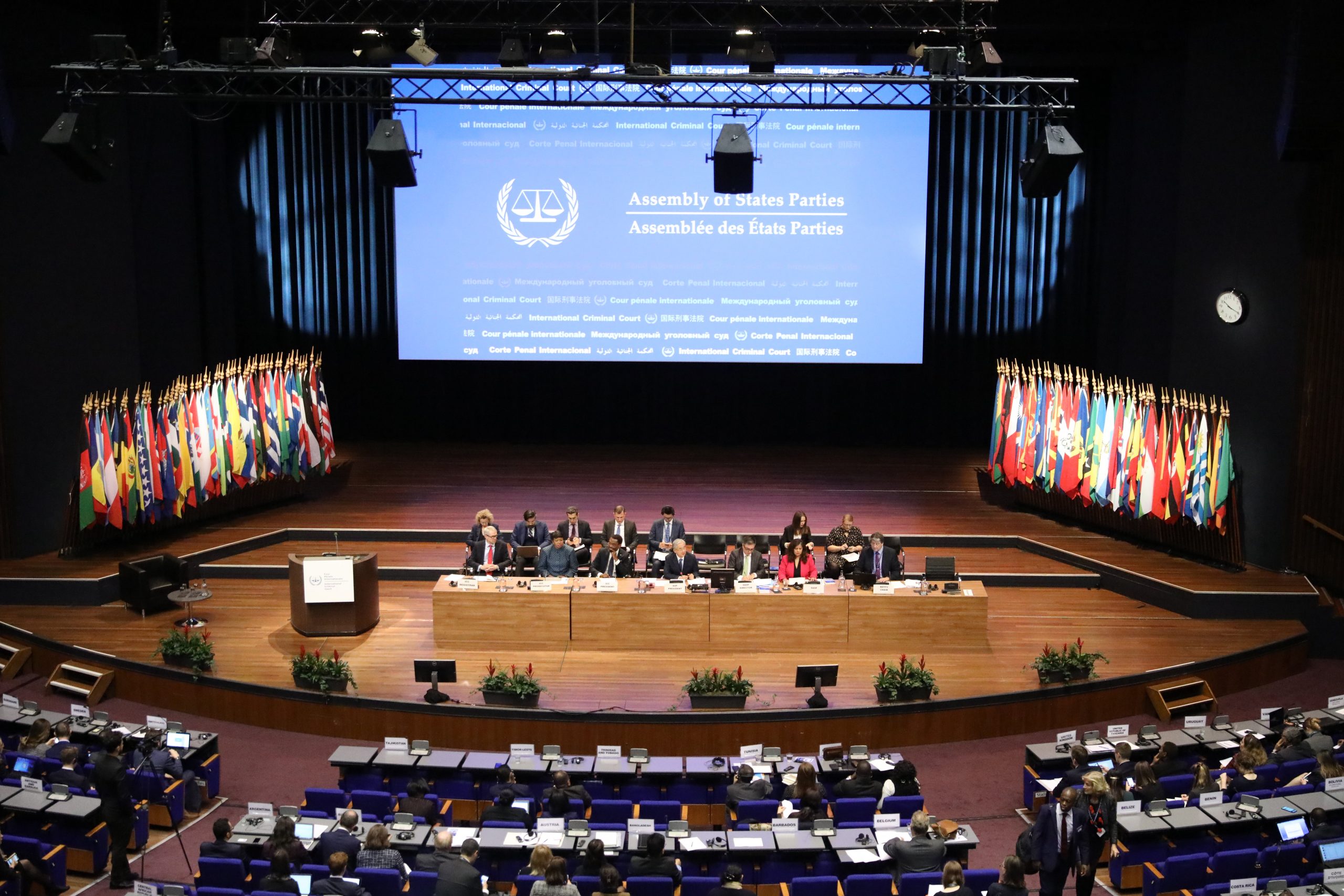 The ASP represents one of the most important events in international justice. States Parties send delegations, the ICC’s most senior officials, including the Prosecutor, President and Registrar attend, and civil society organisations host a great number of side events on the margins of the ASP to discuss the key challenges in an effort to work on solutions to further the project of international justice envisioned by the Rome Statute.

Leading up to this 18th session there was considerable concern with issues relating to: politically motivated attacks on the integrity of the ICC by the US administration; the selection, election and quality of judges; cooperation, particularly in relation to executing arrest warrants; and the Court’s resources, functions and capacity.

Separately and in addition, the Appeals Chamber of the ICC heard oral arguments from 4 – 6 December in the appeal of the April 2019 decision of the Pre-Trial Chamber II which refused the Office of the Prosecutor’s request to open a formal investigation into alleged war crimes and crimes against humanity committed in the situation of Afghanistan. This made for a notable week to be in The Hague for international justice.

Outcomes at the 18th session of the ASP

Throughout the week, the ASP held General Debate and thematic Plenary sessions relating to cooperation and review of the ICC. There were seven resolutions adopted by consensus, including amendments to Article 8 of the Rome Statute  which added starvation as a war crime when committed in the context of an non-international armed conflict – where it previously only existed as a crime in the context of an international armed conflict.

One of the highlights of the outcomes of the ASP is the creation of an independent expert review process with a group of independent experts mandated with assessing and reviewing the ICC and making recommendations. The review is focused on three key areas: governance; judiciary and prosecution and investigation. Over 60 experts were presented to lead the review in the key areas and a final list of nine names were chosen by ASP President Judge Kwon.

It was disappointing that the 2020 budget adopted for the ICC was less than what was recommend increase of 1.7%. The budget adopted was only an increase of 0.41% of the 2019 budget. This in turn has a significant impact on the capacity, ability and functioning of the Court, undermining an essential mechanism for accountability.

Highlights from the Plenary

In a plenary session focused on cooperation, titled ‘Inter-State and Inter-Institutional Cooperation at the Heart of Cooperation Challenges’, a variety of panelists from the ICC, including the Prosecutor and Registrar, regional organisations and representatives from States, shared their experiences on how to address the challenges of cooperation and the legal and political constraints involved. They emphasised the need to strengthen capacity at the national level and that significant works remains to be done to enhance cooperation between States and the Court.

A highlight for us was the presentation from Eurojust’s Genocide Network’s, Matevz Pezdirc who spoke about the network. Eurojust is the European Union’s Criminal Justice Cooperation Agency and includes the national authorities of the 27 EU member states, non-government organisations and observer states such as Canada and the USA. The network was set up in 2002 in parallel to the establishment of the ICC with a clear obligation to fulfill the Rome Statute’s principle of complementarity and to fulfill the State’s primary responsibility to investigate and prosecute core international crimes. The network works with and values the importance of civil society organisations fighting impunity and specialised NGOs in the field who document international crimes. It was noted that an important critical factor in effectively investigating and prosecuting international crimes at the national level requires setting up national specialised mechanisms, specialised investigations unit or dedicated teams to investigate international crimes. We have been using the network in our policy submissions and have stated that Australia should join as an observer state to contribute and learn from counterparts on the effective and efficient investigation and prosecution of international crimes. Read more about the network here.

There was a multitude of side events co-hosted by civil society organisations and State sponsored events. Many of the sessions were held concurrently making it difficult to decide which event to attend. The following includes perspectives from some of the sessions attended by ACIJ Director, Rawan Arraf.

The Hague Principles on Sexual Violence

Co-hosted by Women’s Initiative for Gender Justice, the International Gender Champions – Justice Impact Group and 21 States, including Australia, this was an important event to launch The Hague Principles on Sexual Violence. The Hague Principles is the culmination of over 50 civil society organisations coming together to bring the voices of survivors of sexual violence to the forefront in the discussions addressing sexual violence. More than 500 survivors were consulted on what they think makes violence ‘sexual’.

Co-hosted by Impunity Watch, PAX and the Violations Documentation Centre, it brought panelists from Syria and the Yazidi community from Iraq. Khalil Alhaj Saleh, a Syrian activist from Raqqa who now leads a group of family members of the disappeared, spoke about the fate of those disappeared and emphasised that forced disappearances should be part of any investigations into ISIS and to ensure that victims receive reparations and compensation. Basma Aldakhi, a Yazidi survivor of ISIS brutality spoke of the urgent need for prosecutions to ensure no repetition of these crimes and about her role as a peace mediator in northern Iraq, and Syrian lawyer Mazen Darwish warned against selective justice in proposed plans from some States to target ISIS fighters for prosecution only.

Co-hosted by Germany and the International Nuremberg Principles Academy, the highlight was the fascinating conversation between academics Professor Concepcion Escobar Hernandez, Professor Leila Sadat and Professor Dapo Akande whom used the significance of Nuremberg Principle III – that a person committing a crime under international law while Head of State or responsible government official, does not relieve them of responsibility for that act under international law – to springboard the discussion around their current work, particularly on the question of head of state immunity in relation to the drafting of the draft convention on crimes against humanity. It was agreed by all that it was important to preserve the value of Nuremberg Principle III, the basis of which is against impunity. 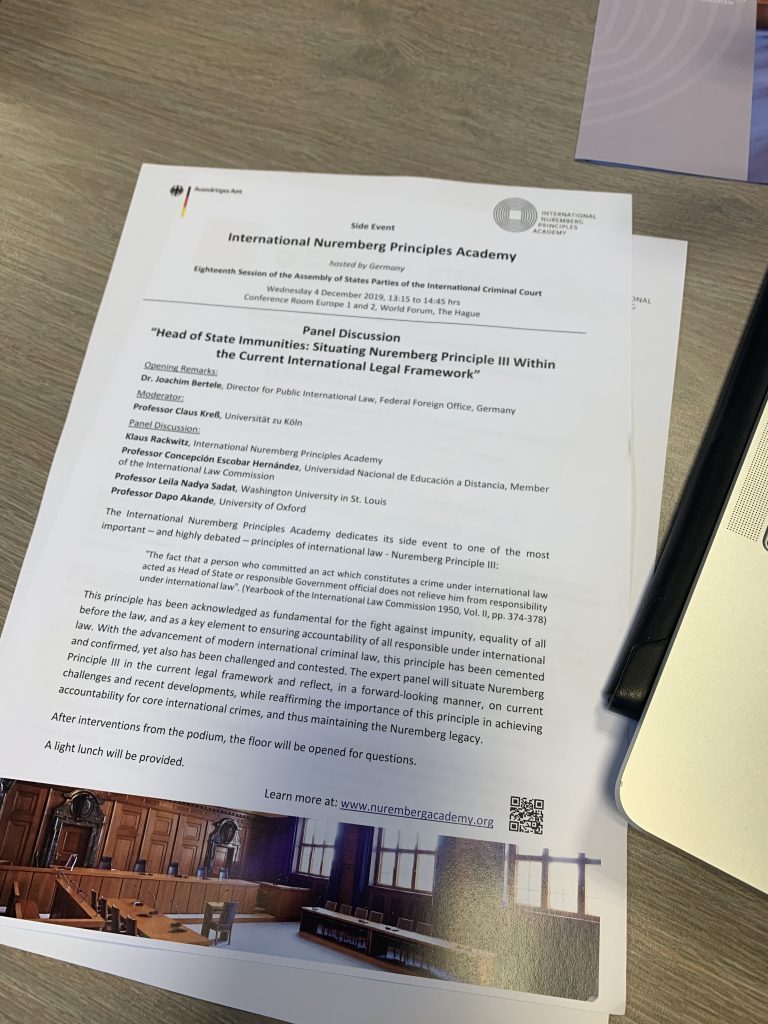 Co-hosted by Amnesty International and Legal Action Worldwide, the highlight was hearing Yasmin Sooka, Chair of the UN Commission on Human Rights for South Sudan and the rest of the panel discuss ways to bring accountability in an environment of total impunity. 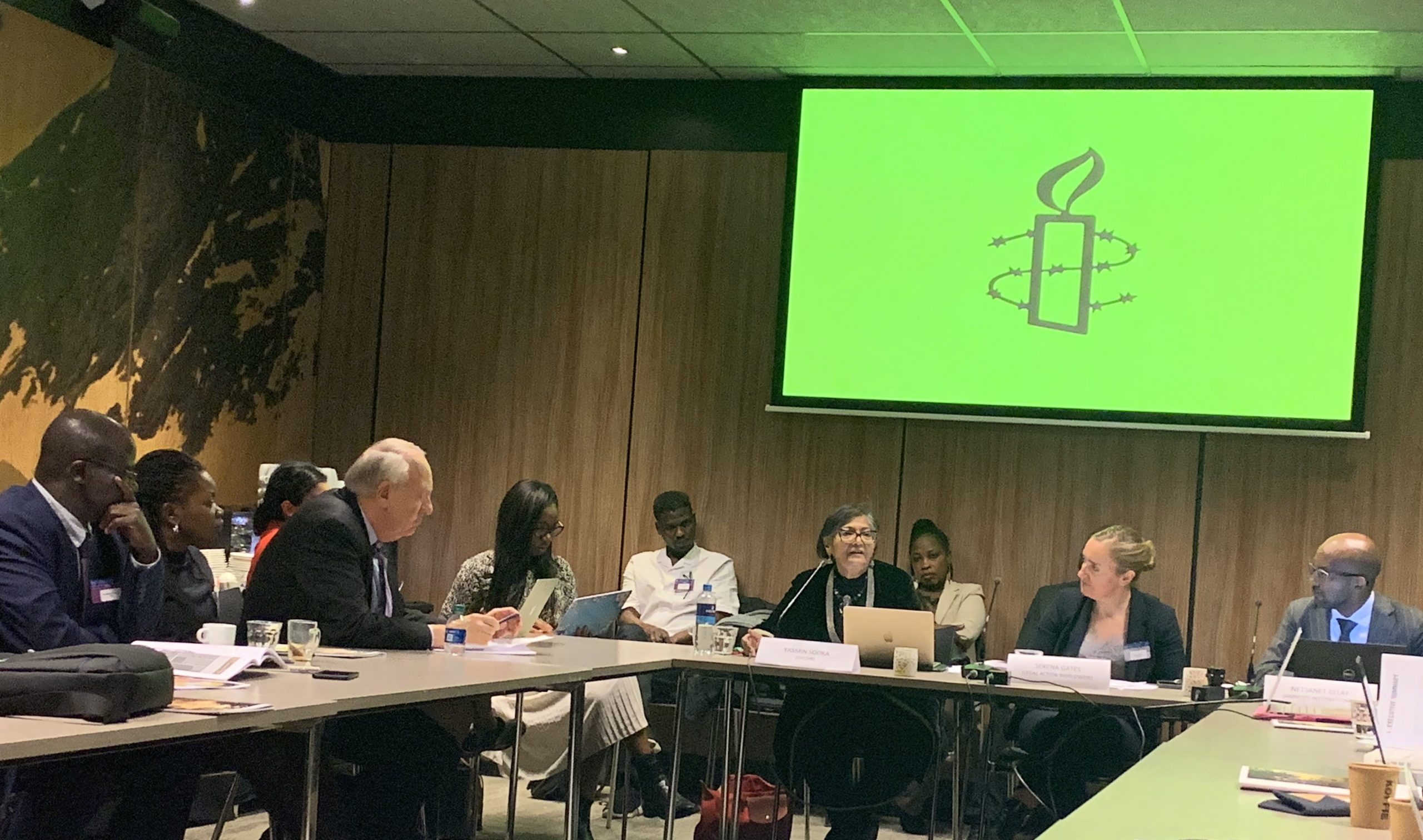 Strengthening the Role of the International Criminal Court in the Asia-Pacific Region: A Discussion among Civil Society, States, and the ICC

Hosted by the Coalition for the ICC, this event brought together civil society representatives from Afghanistan, Malaysia, the Philippines and Bangladesh and others from the Asia-Pacific region and discussed the challenges of impunity and accountability efforts in the region. The President of the Assembly of States Parties, Judge O-Gon Kwon was present to provide remarks in conclusion. 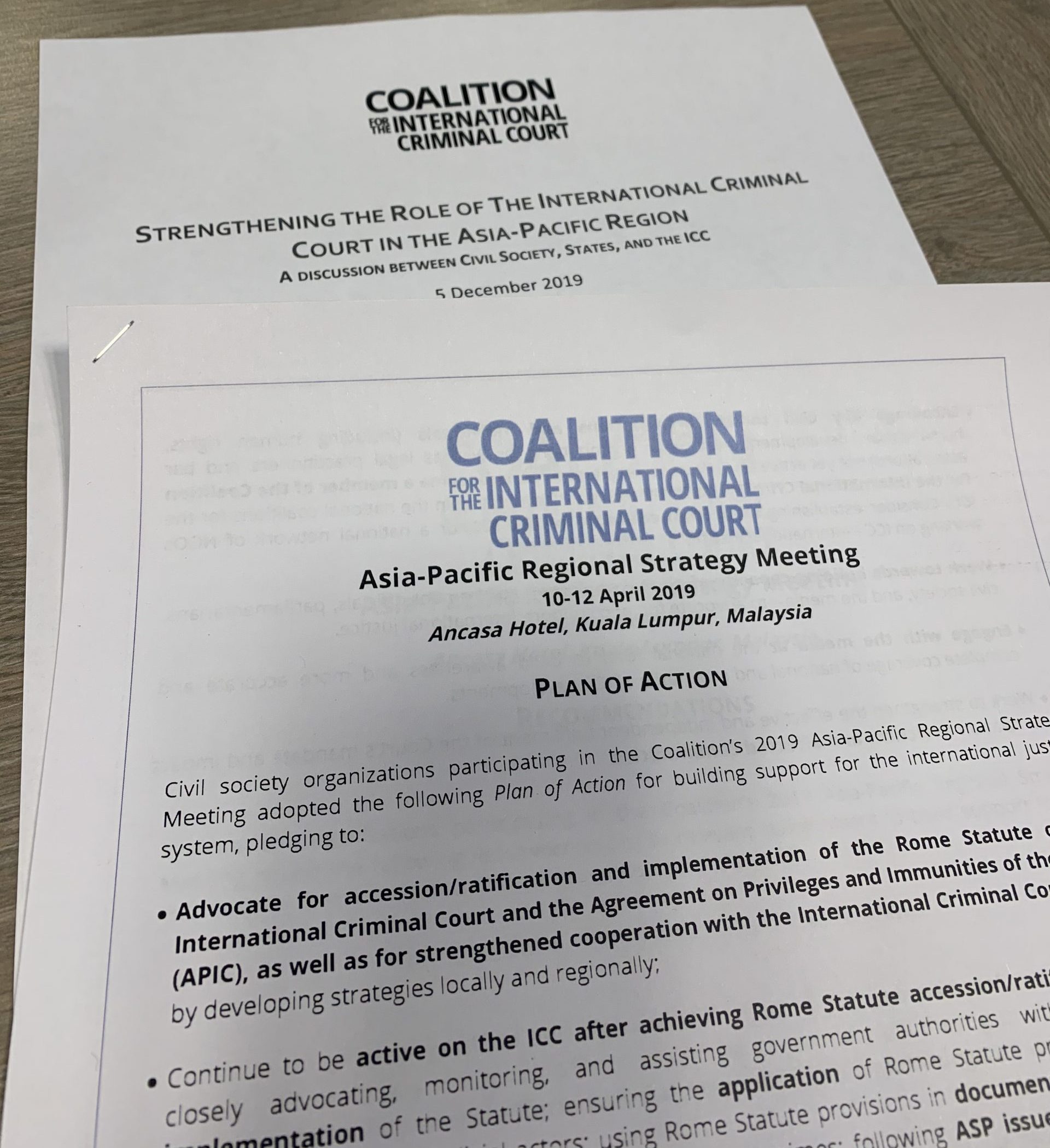 Co-hosted by Liechtenstein, Canada, the European Center for Constitutional and Human Rights (ECCHR), the Global Justice Center, the Global Center for the Responsibility to Protect and the Women’s Initiatives for Gender Justice. 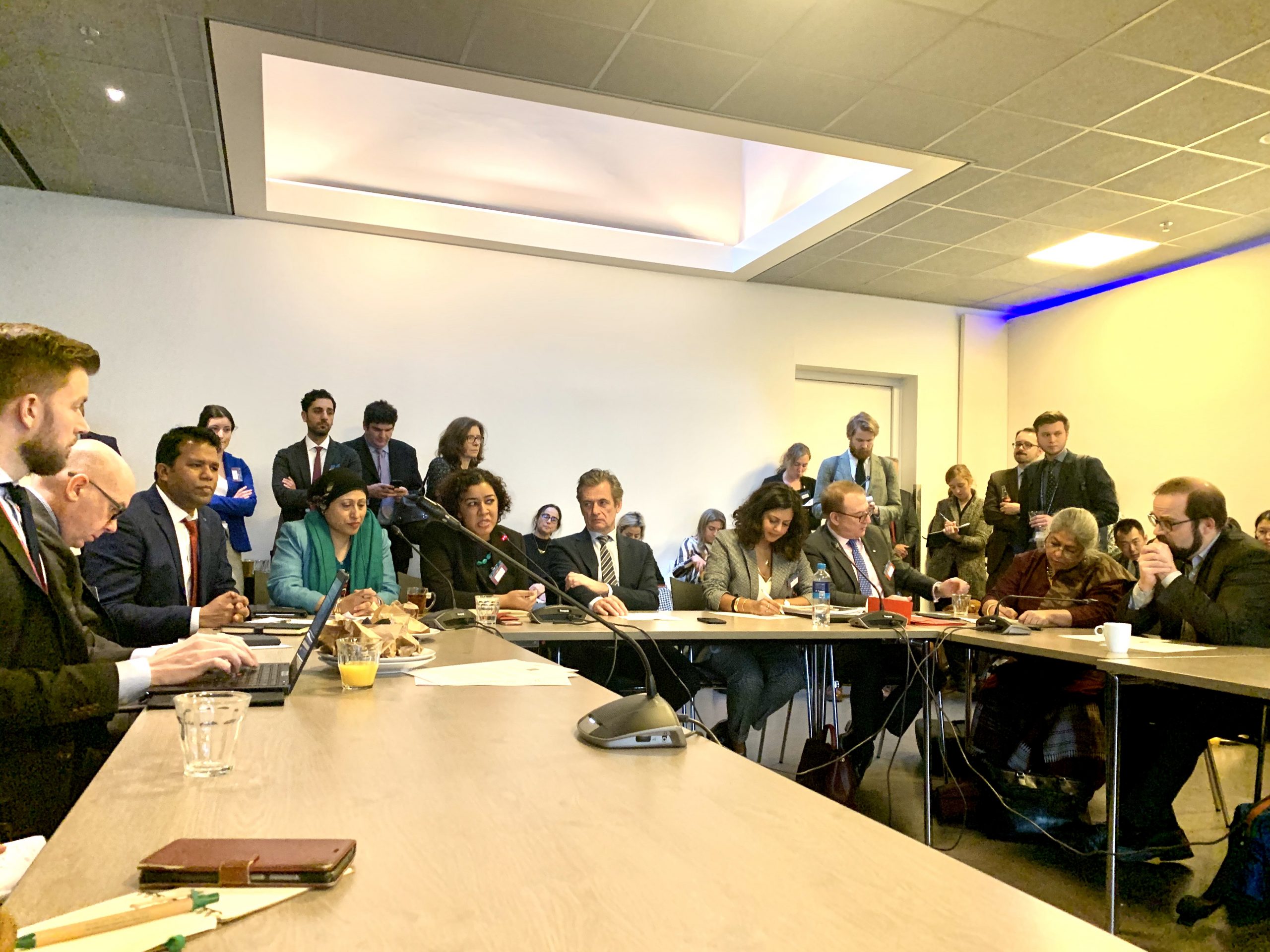 This important event was organised by Australia, Sweden, the International Center for Transitional Justice (ICTJ) and the International Nuremberg Principles Academy. The Australian Ambassador, Matthew Neuhaus commenced by recalling the Rome Statute’s preamble on the duty of States to exercise their criminal jurisdiction for international crimes. Ambassador Neuhaus stated that Australia and Romania were appointed as focal points on the topic of complementarity and produced the report tabled at the ASP session. Ambassador Neuhaus also spoke about Australia’s partnership with the Dutch authorities in the ongoing investigations of the downing of Flight MH17.

Sweden’s Ambassador Annika Markovic spoke about the importance of supporting national level prosecutions and noted that Swedish authorities are at the forefront of investigating and prosecuting international crimes under the principle of universal jurisdictions and spoke about Sweden’s well functioning specialised war crimes unit.

Panelists, Howard Varney, Senior Program Advisor at the ICTJ and Ivan Velasquez Gomez from the International Commission Against Impunity in Guatemala both spoke in detail about the challenges of prosecutions in post-conflict situations, the need to ensure civil society participation and the need for independent judicial and prosecution services. Viviane Dittrich, Deputy Director at the International Nuremberg Principles Academy, emphasised three key factors for effective national prosecutions: international cooperation; knowledge-sharing and standard setting. 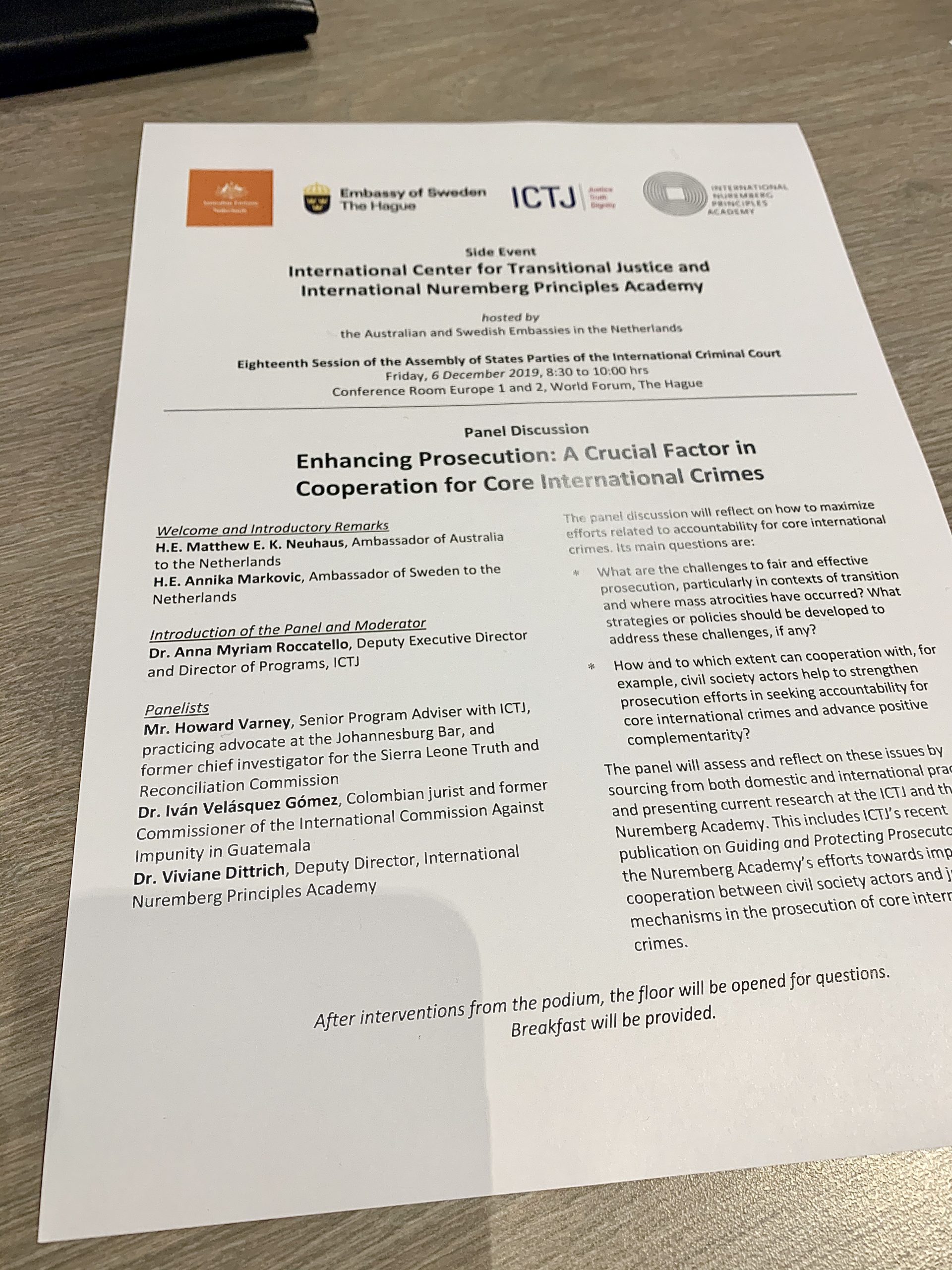 The ICC Prosecutor presented her Office’s annual Preliminary Examinations Activities Report. It was standing room only as the event presented an opportunity for civil society to offer critical feedback to the OTP, most primarily on the time and delay taken in conducting the examinations. Strong interventions came from representatives of civil society organisations from Colombia, Mexico, Venezuela, Palestine and Nigeria. The Prosecutor indicated that her Office intends to conclude most of the preliminary examinations in 2020. 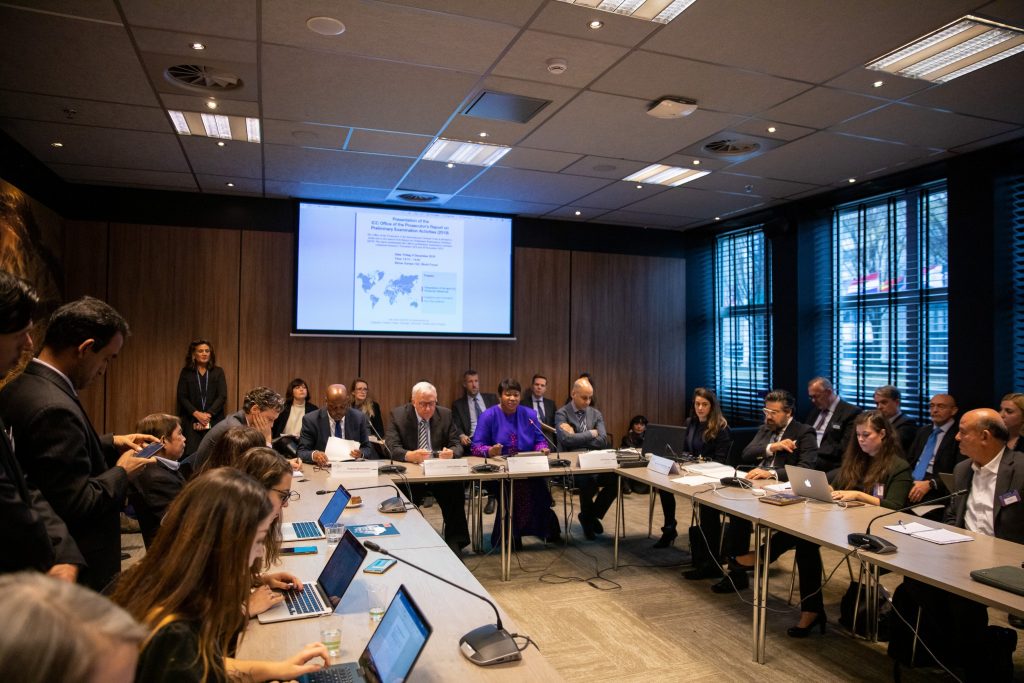